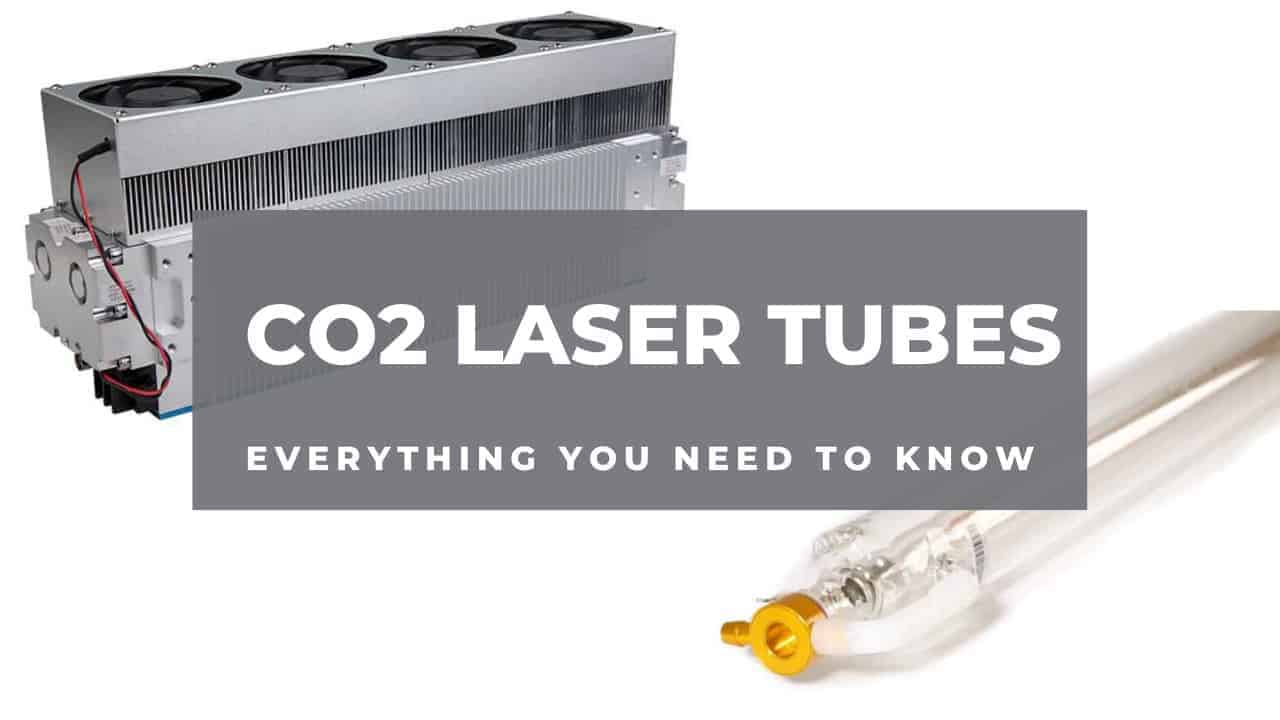 CO2 lasers tubes have been around for a long time (since the sixties) and are still the most widely used type of laser tubes. Their efficiency, high continuous power, versatility, and cost have allowed them to find its application in many different industries as well as hobby applications, especially with the price drop throughout the years. In this article, we will cover everything you need to know about CO2 laser tubes starting with…

How does a CO2 laser tube work

Glass CO2 laser tube consists of 2 separate tube systems, one for gas and one for coolant fluid (usually water).

The gas tube is filled with a specific mixture of gasses in the ration of 1:1:8, typically:

Sometimes, small amounts of other gasses (like hydrogen (H2), xenon (Xe), oxygen (O2), or carbon monoxide (CO)) may be added to the mixture, but it depends on application and manufacturer. Exact proportions and best performing gas mixtures have become a sort of a trade secret that manufacturers like to keep for themselves.
Each of the gasses in the mixture serves a different role:
–CO2 is the gas that generates the infrared radiation
–N2  gas molecules are easier to excite (compared to CO2) so it functions as an initiator for C02 molecules
–He gas help CO2 molecules relax, take away heat and “recycle” the whole process.

Disclaimer: Since I’m not a chemist or physicist, and this is a quite complicated topic (almost literally rocket science), I’ll try to explain this in the way I understood it and hopefully it will make sense. Apologies to actual scientists for what follows 🙂

When an electric current runs through the tube, nitrogen molecules get excited (their energy increases) causing them to “vibrate”. The vibration of nitrogen, in turn, excites the CO2 molecules which increase their energy but this is only temporary because they have a natural tendency to return to their normal state. In the process of doing so, photons are released. These photons bounce between two mirrors at the end of the tube gathering other photons along the way and forming a laser beam. One of the mirrors (the one at the cathode end) is only partially reflective. Once the beam is fully formed and powerful enough it will go through that partially reflective mirror and onto external mirrors, lens, and finally the material itself. Here is a short minutephysics video explaining this:

There are 2 main types of CO2 laser tubes:

While these are both CO2 laser tubes they are different in the way they operate, the way they are manufactured, and in their characteristics.

As far as the cutting speed and quality… there is no big difference between RF and DC tubes. You might be able to cut through a bit thicker material with RF tube (due to smaller spot size the same amount of power is concentrated on a smaller area) but that’s only a small gain. On the other hand, DC tubes produce a smoother edge, which RF tubes due to higher frequency pulsing cannot produce. These differences can be seen in clear, see-through materials such as acrylics. So there are not a lot of differences to be seen as far as the cutting is concerned. But there are other areas where the advantages (and disadvantages) of these two types of tubes can be seen.

Now, it’s easy to fall into a trap and think “I’ll just always run it at peak power. If I can get more than it says on the label, why not take advantage of that free power”, but that would drastically shorten the life of your tube. While your tube is capable of generating more power than it says on a label this is not sustainable over a long period. Since tubes degrade and lose power over time, this additional power that you get out of your tube is usually the manufacturer’s way to make sure that your tube will last you throughout the warranty.

example: 80 Watts rated tube from a reputable manufacturer can have a peak power of more than 90 Watts

But this is one side of the story. The above practice is for reputable manufacturers that produce quality (and expensive) tubes. On the other side of the coin are not so reputable manufacturers that use this gray area with rated and peak power to their advantage. So, instead of providing extra watts on top of a rated power to make sure the tube lasts long enough, they market the peak power as rated power and are essentially selling tubes that are not capable of delivering what it says on the label.

example: 80 Watts rated tube from, lets say, not so reputable manufacturer is often just a 60-65 Watts tube that peaked at 80 Watts.

This is why milliammeter and (preferably) laser power probe (calorimeter-based measuring device) is something you should consider investing in if you plan to go with cheap glass tubes from Chinese manufacturers.

Since power probes can be quite expensive, another way to find out the power of your tube (at least approximately) is by measuring its physical size. Laser tubes power increase with the volume of enclosed gas which means bigger (longer) tube=more power. You can compare your measurements with measurements in the table below to see the actual power of your tube.

Note: Some manufacturers might produce tubes of slightly different dimensions. For example, an 80W tube can also be 1650×60 mm instead of 1250x80mm, but if you calculate the volume of the gas (length*radius) you get the same number. Also, some tubes (like SPT T series) have additional laser pointer used for beam alignment mounted on the end of the tube which increases the overall length of the tube.

Picking the type of a laser tube you want in your laser cutter will usually come down to money. Metal tubes (and machines equipped with such) have many advantages but cost several times more than DC ones. That alone will be a deciding factor for many. On the other hand, maybe the price difference is something you are willing to pay just so that you don’t have to monitor performance and replace your tube every 3-4000 hours. Whatever the case is, it is important to know what you are getting with each so you can decide which is the best for you.

Buying a CO2 laser cutter – how much power do you really need?