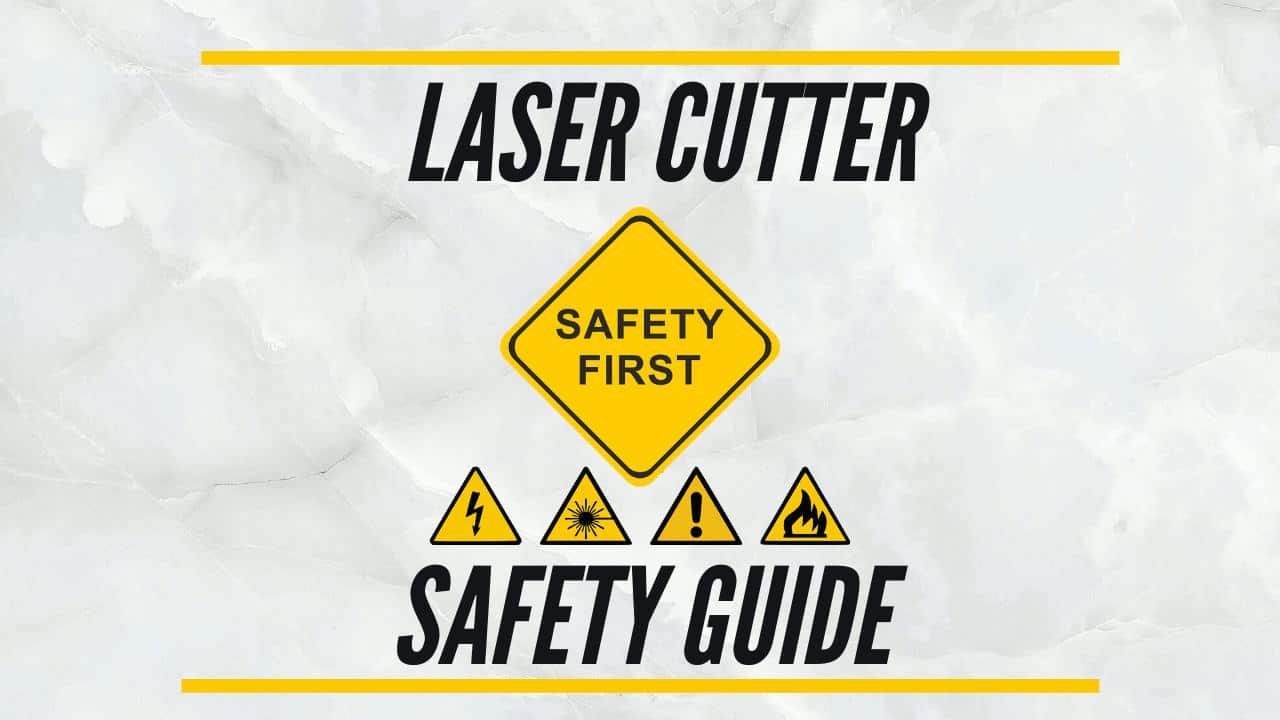 Laser cutting machines have become less expensive and are making their way into an increasing number of homes and personal workshops. And while modern laser cutters are not particularly dangerous machines to own and operate, it is important to be aware of risks involved and safety measures that can be taken to minimize chances for potential hazards. In this article, we will look into different classes of lasers, materials you shouldn’t use, potential risks involved and precautions to be taken to minimize those risks.

Important note: this article is for information purposes only and is not intended as a replacement for proper safety training.

Lasers are divided into 4 classes (and few subclasses) based on their wavelength, maximum output power, and amount of damage they can inflict on exposed people. These classes are:

Now, you might have noticed that all lasers used in laser cutting and engraving machines fall into the class 4 category because they are all well above the limit of 0.5 Watts in output power. But, because those machines usually come in a fully enclosed case with safety switches that prevent lasers from firing when the doors are open, these devices are categorized as Class 2 or even Class 1 – safe if used properly. It’s just like with CD and DVD writers. They use class 3 lasers, but because they are fully enclosed in a plastic or metal case they are classified as class 1 lasers.

That being said, don’t take this lightly, there are still risks involved with operating laser cutters.

What are the risks of using a laser cutter?

As noted above Class 4 lasers are considered dangerous when not properly enclosed because of the damage they can produce to skins and particularly eyes. As long as the laser beam is fully enclosed when operated it cannot harm you. The clear acrylic/polycarbonate window on the top of the laser will absorb any reflected laser beam since the infrared beam produced by laser cutters (at that wavelength) is basically heat. That said, you still shouldn’t look at the cutting spot for too long because some materials reflect parts of the beam in the form of visible light. Many machine come with cutting beds made of aluminum which is quite reflective, so make sure that the machine doors are closed while the laser is firing and that you wear safety glasses when they are not (like when you are aligning the beam).

Lasers in cutting and engraving machines produce light in the near and far infrared spectrum which is invisible to the naked eye. Because you don’t see the laser beam it is easy to forget they are there and try to do something that you otherwise wouldn’t, like stare at mirrors or pull out pieces of material while the machine is running. Even if you are extremely careful to avoid beams, laser heads tend to quickly jump unexpectedly during operations and move the beam in your direction.

There is a great piece of advice circling in laser cutting community on this topic. It’s the first safety advice I heard and it stuck with me to this day. It goes like this:

Don’t stare at the laser with your remaining eye.

If you want to see what happens when laser beam reaches the eye, there is an interesting experiment conducted by YouTuber William Osman in which he tested his laser cutter on some pig eyes he got from local butchery (warning – it is not pretty).

Luckily, due to small surface area chances for eye exposure is quite small (if you don’t do anything stupid). What is more likely (but also far less serious) is damage to the skin (typically hands). While painful, it is not severe and will heal quickly. Even so, you should not operate your laser unless all covers are in place.

Laser cutters use concentrated heat to vaporize parts of the material and as such pose a real fire safety concerns. Dangers don’t come from the laser itself but from the material that is cut. Some materials (like acrylic for example) are more flammable than others and can burst into open flame. Small flame paired with fume extraction fans which sucks a huge amount of fresh air into the machine will quickly turn into a full-blown fire if not handled immediately. All it takes I couple of minutes.

Burning different materials will produce a various amount of smoke and fumes which need to be extracted. Not only does smoke and fumes reduce the power of the laser beam by blocking its path, but some materials produce fumes that can damage the machine or even poison you.

We already covered what materials you should and shouldn’t cut and how to differentiate types of plastic. In a few words – there are several materials that (technically) can be cut but should be avoided for different reasons. One material that you should never cut is PVC (or anything with chlorine in it) because it creates hydrochloric acid which is dangerous if it gets into lungs or eyes. And if that’s not enough, it will also ruin your optics and corrode metal in your machine.
If available always consult MSDS (material safety data sheet) for any new material.

This is mostly a concern for lasers with DC (glass) laser tubes. Because of the way they operate, one end of the laser tube has a very high voltage (around 20 000 Volts) which can be lethal if handled improperly.
Other than that as far as electrical hazards are concerned, they are as dangerous as any other electrical appliance.

Most enclosed laser cutters come with several built-in security features that greatly reduce the risks of potential hazards. Features like:

But, the most important security features are not technical, they are behavioral. For any laser machine owner, there are several good habits to develop, like:

There are lots of places where it’s easy to cut corners on this but you really shouldn’t. You may leave your laser unattended and everything turns out fine. But it might not. And that’s all it takes.

Now, all this shouldn’t scare you into not buying a laser cutter. All things considered, they are not particularly dangerous if you are not doing anything stupid with it. In practice, they are safer than most machines that perform a similar type of work. Most cutting machines use some kind of blade or drill to cut material that can easily cut your finger if you are not careful.

This is meant to provide guidelines and make you aware of the potential dangers involved with owning and operating laser cutting machines. The most important advice you can take from this is Use common sense and never leave laser running unattended.

How to price your laser cut products

What materials can laser cutters cut