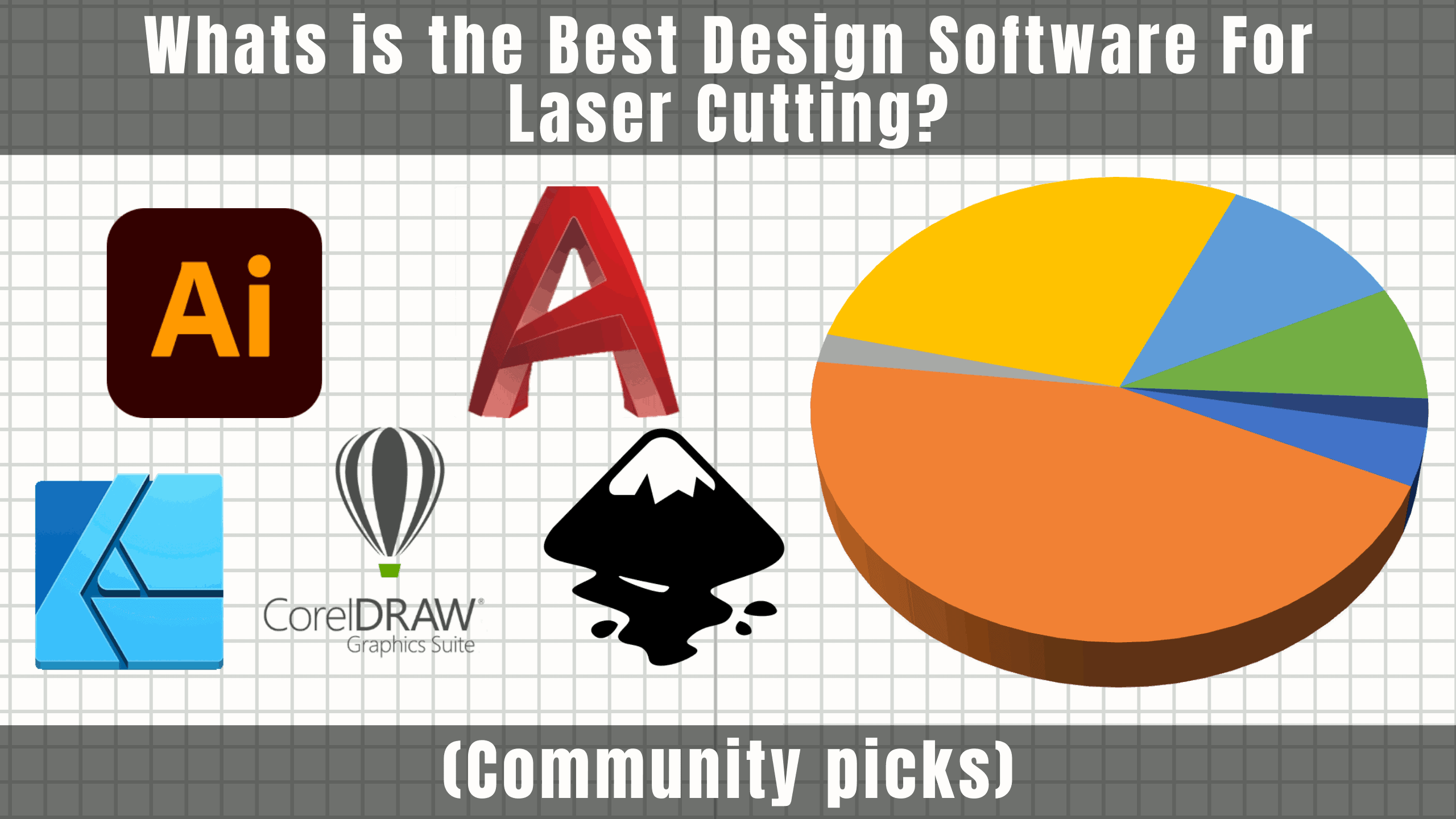 If you are thinking of getting into laser cutting it is a good idea to familiarize yourself with some vector design software. First of all, drawing something on a computer and then making a physical object out of that is a lot of fun. And even if you plan to buy designs or hire someone to do the design work for you, those designs are rarely 100% “laser ready”. Most of the time you will need to modify designs and make adjustments to get the best results. But, with so many different options out there it’s hard to know which one to use, which one is most compatible with laser cutting? In this article, you can read the pros and cons of several different free and paid vector graphic software solutions.

Note that this list is “Best design software for laser cutting” which means we will only cover designing tools that are commonly used by laser cutting community.
So, without further ado, here are the most popular software used to create designs for laser cutters (in no particular order):

One of the most popular choices in the laser cutting community (especially among beginners) is Inkscape and it’s easy to understand why. Graphic design software tools are used primarily by professionals, and as such can get pretty expensive. For people just getting into laser cutting, there are already lots of expenses (buying equipment, adapting workshops, etc.) so it’s no wonder that free, cross-platform, and open-source software is quite popular in the community. But don’t let the price (or lack of it) fool you. Inkscape is quite a powerful vector editing tool with more features than you are ever going to use, and will handle everything you throw at it when designing for laser cutting. It may lack some of the advanced features (which you rarely need) that paid software provides which will allow you to cut corners and save some time in the design process. Do those advanced features warrant the difference in price? That is up to you to decide.

Inkscape’s native file format is .svg which has become sort of laser cutting “industry standard” (along with .pdf) especially in the last couple of years. Most laser driver software support this format and since its “browser friendly” (.xml based, small in size) most of the online file generating tools use .svg as their format of choice.

Being open-source and having a great community, led to the creation of a large number of extensions for Inkscape, many of them created for laser cutters which allow you to create jigsaws and tabbed box or export designs into gcode.

Another great Inkscape feature is built-in interactive tutorials. What’s unique about them is that they are in .svg format so you can open and modify them directly in Inkscape.

Over the years Illustrator has become widely recognized as an industry standard for designing vector graphics. Compared to Inkscape, Illustrator comes with several advanced features but few of them actually relevant for laser cutting. Some steps in the designing process might be faster compared to Inkscape but only if you are proficient with Illustrator. And with advanced features comes an advanced price. Adobe discontinued CS (creative suite) and switched to a subscription-based model (Creative Cloud), so now you can only “rent” software. Currently, Adobe Illustrator license costs 21$/month which can be a lot for people who don’t use Illustrator as a primary money-making tool, but rather as a “support tool” for their laser cutter.

Another downside to Illustrator that can affect laser owners is hardware requirements. Because laser cutters are usually kept at workshops, people tend to use any old PC they can find to serve as a workstation for laser cutters. Using Illustrator on an old, low-performance PC can quickly get frustrating.

Adobe suite applications work really well with each other, so if you find yourself often switching from raster (PhotoShop) to vector (Illustrator), staying within Adobe editing tools will make your life easier. They both use a similar layout, so you might have an easier learning curve, but don’t expect it to be a walk in the park because these tools are designed to work with a different type of graphics.

Illustrator supports Actions, which are shortcuts for prerecorded tasks that you can use for steps you perform frequently – think of it like macros for Excel.

Affinity Designer is a vector graphic software created for macOS and iOS (Windows version available also) and is marketed as an Illustrator alternative. It is well designed and user friendly like most products created with macOS in mind,. But it also lacks some quite important features often used when designing for laser cutters like automatic image tracing or path offsets which is pretty standard and can be found even in a free tool like Inkscape.

File format support is also lacking a bit. It doesn’t support .dxf files and .svg files cannot be exported with “real” units (millimeters or inches). You have to use pixels instead.
With the price point set at 50$ (one-time purchase), it really is a cheap alternative for Illustrator, but Inkscape is a better one (feature-wise) and is free.
One thing that Affinity designer has over Inkscape is the ease of use. Better design and fewer features provide less intimidating working area and that can appeal to beginners.

CorelDraw is another popular tool in the laser cutting community. One of the reasons for it is that Chinese lasers manufacturers often pack some version of CorelDraw (often pirated) with their proprietary laser controlling software. But, nevertheless, CorelDraw is a great tool that makes it easy to quickly create laser cutting designs.

Corel uses proprietary .cdr file format which is not supported by most of the laser controlling software, but surprisingly enough, this doesn’t make your entire workflow slower – quite the opposite. This is because for almost any controlling software out there you can find a Corel macro (works exactly like Excel macros) which allows you to transfer drawings to controlling software at a single button click (no need to save to a different format, start other software and manually import). This is probably something you will use a lot! But, be aware if you want to use this you will need a full version of CorelDraw because macros will not work in a student version that comes without VBA (visual basic) which is used to create macros.

One of Corel’s great tools I found really useful is the virtual segment delete tool. It allows you to easily delete a line between any two “crossroads”. This is very useful tool especially when you want to preserve some lines that would otherwise gone if you used boolean union operation for example.

As far as the price is concerned, Corel has a significantly higher upfront cost compared to Illustrator, but that’s because it’s sold not rented. It’s a one-time investment. So if you plan on using it for years to come, buying it might prove to be much more cost-effective compared to renting Illustrator, especially when you consider that the vast majority of new features that you will get with the latest version of Illustrator are not directly laser cut related. Oh, and if you are looking to buy CorelDraw, wait for special offers. It’s quite often on sale and you can get it at half or a third of the original price.

Above mentioned tools are really good for designing anything “visual” like logos or anything that suppose to look “artistic”, but they lack some functionalities when doing precision work like designing machine parts for example. You can definitely do it, but that’s not really what they are made for.

Think of it this way:

AutoCAD is a leader in architecture and machining industry and is designed with accuracy in mind, with features like smart dimensioning (automatic creation of measurements within drawings) and advanced calculation (area, mass, volume, etc.) built into the software.

AutoCAD also offers a subscription-based pricing model (monthly and yearly) and most expensive of all the above-mentioned options (200$ a month). There are some ways to reduce costs or get free version (like getting an educational license with student email) but in general, AutoCad Is probably overkill for most laser cutter owners and doesn’t warrant the price.

LightBurn’s primary function is to serve as a laser controlling software, but it does offer most of the basic features you will need and even some advanced ones.

While it can’t compare with others when it comes to designing, LightBurn has one big advantage that earned him a place on this list. While other tools are geared towards designing in general, LightBurn is created specifically for laser cutters. All of the build-in design features are created with laser cutting in mind, so you will often find that there is no need to go to your design software to create something when you can do it in a few clicks from your laser controlling software.

Although laser cutters are two-dimensional machines, quite often there is a need to create a three-dimensional object with it like boxes or 3D models. While it is possible to create drawing for this in any of the above-mentioned 2D software, 3D software allows you to do it in a shorter time and with much less effort. Plus, the ability to visualize how different interlocking parts fit together and to parameterize your dimensions based on the thickness of the material are more than welcome features. Some of the most popular 3D design software in the laser cutting community are:

This is the shortlist, and not every software will be on this list as we said in the intro. There are tons of other vector design editors out there that you can use to create designs for laser cutters and if you are already familiar with any of them and it has an option to export your work in a format that your laser driving software will read then – go for it. The best software is the one you already know how to use.

In the end, here is the pie chart with percentages of usage for different design software. Its created from a small pool of laser cutter users, but it illustrates the point.