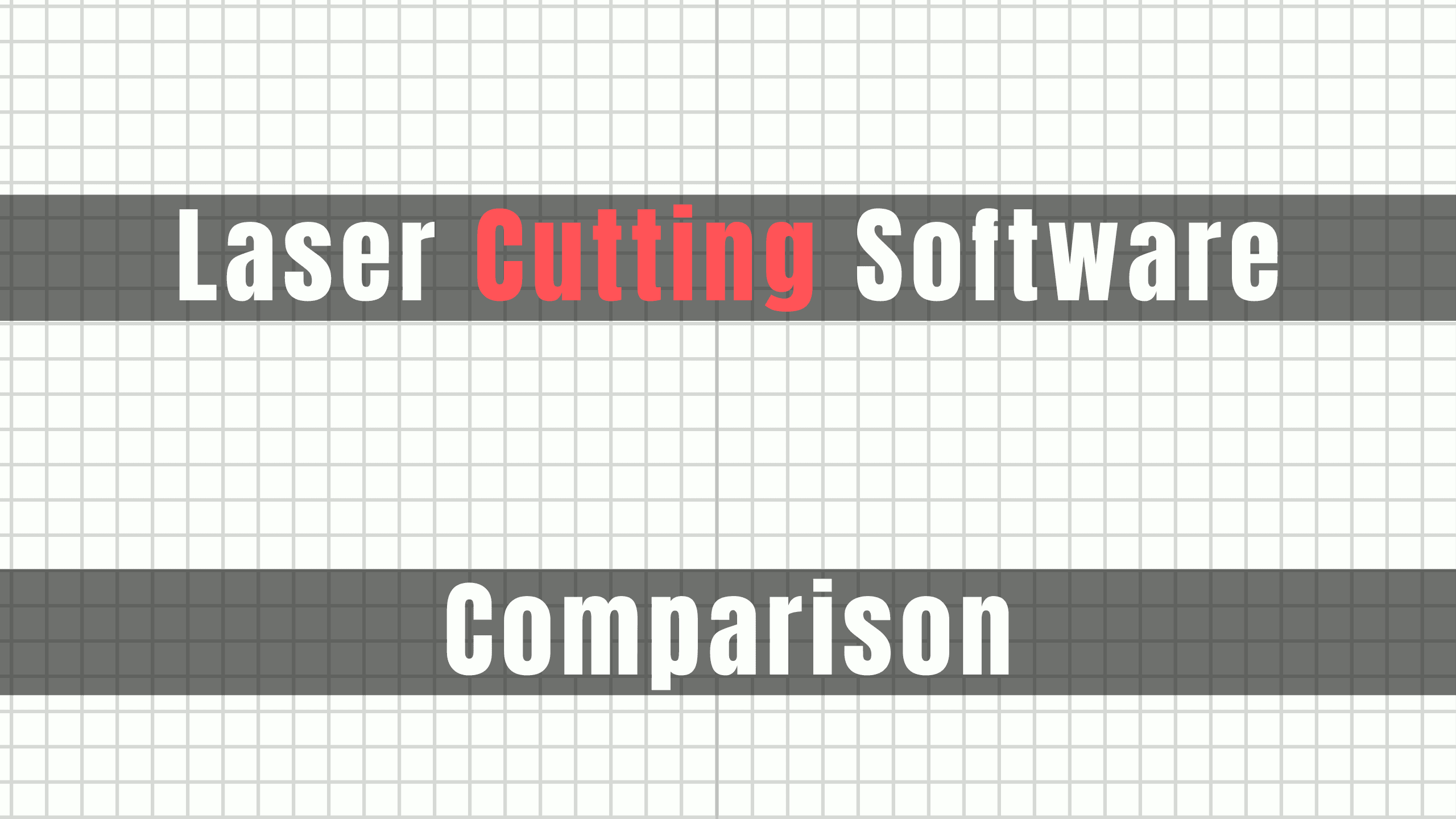 Depending on the brand and the type of the controller in your machine there are several options regarding which software you can use. But, before we get any further first we need to make a distinction between laser designing software and laser control software. They are often used in pairs but they are designed to do different things.

Laser control software (or CAM as they are called in CNC world) are used to convert a graphic design into a set of commands that your laser controller can understand and then translate into a list of coordinates.

With that cleared, here is the list of most commonly used laser control software for laser cutting today.

K40 Whisperer (created by Scorchworks) is laser controlling software most commonly used with legendary/notorious (depending on how you look at it) Chinese K40 laser cutters that come with M2 Nano controllers. It was designed to be used as a (much better) alternative to the LaserDRW software that ships with some of these cheap laser cutters. It simplifies the entire process and eliminates the need for a USB stick that was required with LaserDRW while supporting all the same controllers LaserDRW does and evens some that it doesn’t.

K40 Whisperer is created only as a laser controlling software so It has no design capabilities and it relies on dedicated design software (like Inkscape) for graphics creation. The idea is you create a vector drawing in specialized software, save it in a compatible file format, import it to Whisperer and then Whisperer sends it to the laser cutter.

It is created with Inkscape in mind so it supports Inkscape’s native *.svg format, but can also import files from other design software like Corel or Illustrator as long as you export them in *.svg or *.dxf file format. K40 Whisperer is a free open source program and it works on Windows, Mac OS, and Linux.

Now, while being simple to use is great it also means that it is pretty basic and lacks many functionalities that some more advanced software’s like LightBurn and RDWorks have. This is not something to blame on the software itself but rather on the limitations on M2 Nano controllers that usually come with these machines. So if you already have a laser cutting machine with the M2 Nano controller, then K40 Whisperer is probably good enough for you. But if you are looking to buy a laser cutter you are much better off looking for a machine with DSP controllers like RuiDa, Trocen, or TopWisdom.

While we are talking about M2 Nano controllers software we should mention a relative newcomer in this area and a Whisperer competitor called MeerK40t (pronounced MeerKat). It’s open-source laser cutting software intended to use with M2 Nano controllers. MeerK40t is portable (no installation needed) and works across multiple platforms including Raspberry Pi!

It allows you to run multiple K40 lasers, but one thing that separates it from Whisperer (or any other M2 Nano supported software) is the ability to control the power from the software which M2 Nano controllers are not designed to do, so this software gives it that ability.
Software is still developed and is worth keeping an eye on.

LaserCAD is Windows based laser controlling software developed by Trocen Laser Control System to be used with their controller. It supports most of the commonly used vector (.ai, .dxf, .pdf, .svg…) and bitmap (.jpg, .png, .bmp… ) file types.

While it has some vector drawing capabilities, it is not a designing program, so it is better to prepare your designs in some specialized vector graphics software, save it in one of the supported file formats and import it into LaserCAD. To ease the workflow there is a macro available for both Corel Draw and AutoCAD which sends your drawings directly to LaserCAD eliminating the need for saving and importing. An important note is that macro installation is not possible on a student/home version of Corel so the full version of the program is required.

The user interface is kind of difficult on the eyes (probably because of the weird small font on the buttons) and since this software is made for the Chinese market and only translated to English, its not quite intuitive.

Other than that it does what it is supposed to do most of the time. If you are a light user and not looking to spend money on more robust and productive piece of software, then LaserCad will work for you.

RDWorks is free laser controlling software created by RuiDa that ships with laser cutters equipped with RuiDa DSP controllers and works on Windows operating systems only. It supports some vector file formats (like .dxf and .ai) but does not support commonly used .pdf or .svg file. Support for CorelDraw is done via a plug-in (like with LaserCAD), and many RDWorks users use it that way since it is the only somewhat productive way to use it. Even though RDWorks implements some design features, they don’t always work as expected so its just better to install Corel with an RDWorks plug-in and create all your designs in CorelDraw. As with LaserCad full version of the program is required to be able to use macros.

Alternatively, you can use vector design programs like Inkscape or Adobe Illustrator and save your designs in *.dxf or .ai formats but importing those files can sometimes mess up drawings and sometimes files created in newer versions of the design program won’t even import, so keep that in mind.

Basically, RDWorks is a useful option for hobbyists that don’t want to spend money on additional software, don’t mind using software that sometimes can have a mind of its own and are planning to use it just as a tool for sending a graphic job to a laser and design in some other software. Most of the time it will do the job you want it to. But for any time-critical, productive work go with LightBurn.

Probably the most polished software on this list is LightBurn. It works across different platforms (Windows, Mac OS, Linux) and is intuitive and easy to learn (especially if you are coming from RDWorks). It allows import of most commonly used graphic and image formats like .ai, .pdf, *.svg, *.dxf, .plt, .png. .jpg, .gif, .bmp. CorelDraw native format (.cdr) is not yet supported, but you can always save in another format, or if that’s too much of a hassle you can use unofficial Corel Draw export to LightBurn macro found on a LightBurn FB page.

Other than being just laser controlling software it has many basic and advanced design functions, so It can be used as a design software also. Many of the standard vector editing tools like offsetting, boolean operations, text, and node manipulation are there so you can get by with only LightBurn for less complex designs.

The built-in preview option shows you exactly how the laser head will move and how long it will take to complete the job, although time total estimated time for job completion is not always accurate.
There is also an option to add a web camera that you can use to better position your parts and get the most out of your materials.
Another neat feature is a customizable material library that allows you to save presets like power and speed for different types of materials or different thicknesses.

There are plenty more really useful features that were designed with laser cutting in mind and since it’s actively developed there are more to come. And if some feature you need is missing, you can write a request for it or vote for features suggested by other people. If the feature is popular enough it will probably be included in one of the future builds.
They have a dedicated user support forum where you can ask questions about more than just the software itself and get responses from the developers and other users.

As for the downsides, LightBurn doesn’t support M2-Nano controllers in the popular K40 laser since this controller doesn’t offer power control through software.
The other downside to LightBurn is the price. License key for the software costs 80$ for DSP controllers (40$ for GCode) and expires after a year but even when it expires it is still valid – you just don’t get updates anymore.
So you pay 80$(or 40$) once and the software works forever as long as you have your license key. If, after a year, you want to continue receiving updates (and you probably do, since it’s actively developed and new features are added all the time) you can renew your license for 30$ for another year of updates.

You can the same license key on up to 2 computers (they will upgrade your license to 3 if you ask them nicely, free of charge) and you can even “transfer” the license to a new computer, you just need to deactivate old one first.
LightBurn offers a free 30 day fully functional trial so you can test the product and see if it is compatible with your controller.

There are several other software solutions out there, a couple of them mostly for Diode or DIY laser owners (like LaserWeb and LaserGRBL) but all in all probably too many to cover them all.

Many brands create software that only works with their laser cutter and some big brands in laser cutter manufacturing space like Epilog, Trotec, and Universal offer their software in the form of a print driver.

Full Spectrum Laser for example offers a web browser-based tool called Retina Engrave which is hosted on the machine itself (no internet connection needed), works with all major browsers, has built-in design capabilities, and allows the use of the cameras. The downside is, you need to buy Full Spectrum Laser to use it.

Different laser cutter manufacturers are using different controllers for their machines. Type of controller will limit your options in which software you can use to communicate with those controllers. But, it’s good to know that most of the time you have options to choose from and that you are not stuck with that one piece of software that comes with the machine.

Best design software for laser cutting
(according to the community)