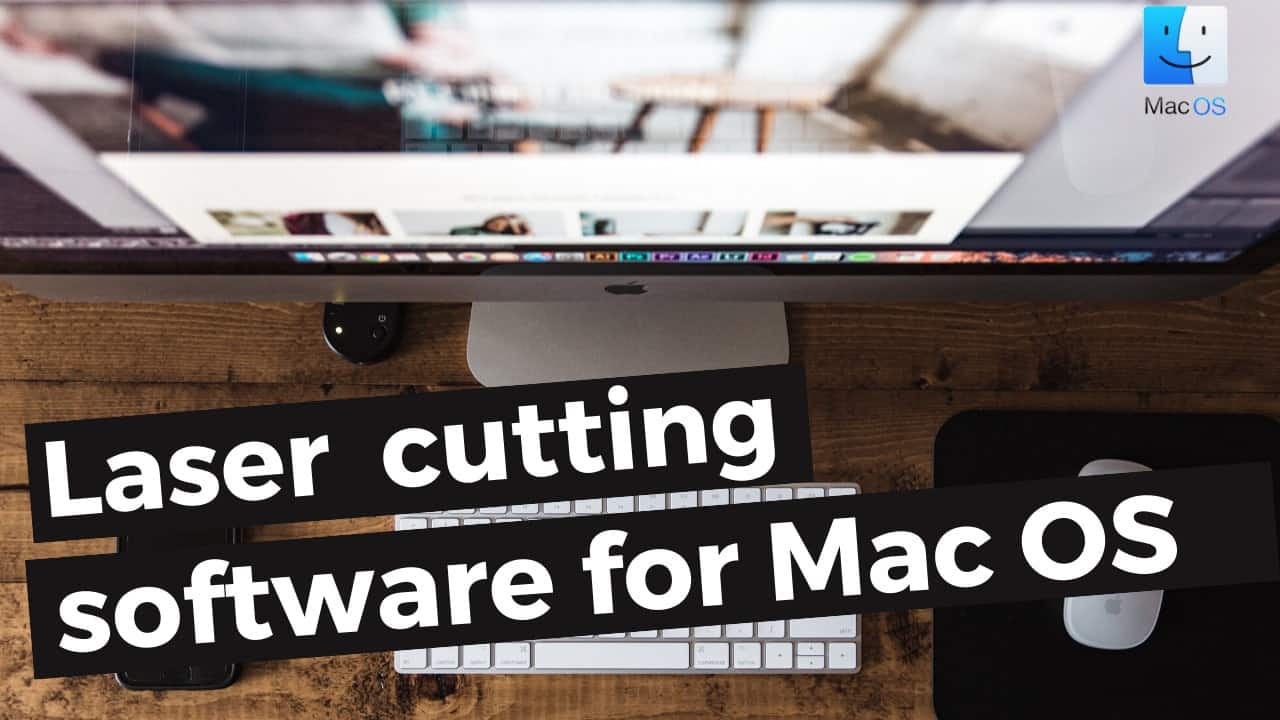 If you were a Mac user trying to get into laser cutting a couple of years ago your options regarding software would have been quite limited. You could either:

Luckily, technology and software are developing rapidly so in this day and age there are plenty of options (paid and free) to choose from if you are not Windows OS user.

Now, before we get started it’s important to make a distinction between laser control software (which is software that communicates with laser cutting machine) and laser design software (app used to create graphics). There are few laser controlling software that offers some designing capabilities and in recent years they got better from designing point of view. But even so, for any serious designing you will need to use proper vector drawing app because control software is just not as capable (which is understandable, it’s not meant to be a drawing software).

Run Windows on a Mac

This option is best used if you have a specific program that you want or need to use which works only on Windows. Controllers in Chinese manufactured laser cutting machines use specific software which is usually windows based (RuiDa controllers work with RDWorks software, Trocen controllers with LaserCAD etc…) so if you want to use this type of software you will need a Windows environment for that. If you have one of these Chinese controllers there is alternative software that works on a Mac, but we will get to it later in this article.

If you don’t want to go for option a) (buy dedicated Windows machine) but still want to use Windows-based software you can install windows on a Mac OS as a virtual machine using Parallels application. With the Parallels app you can run Windows OS inside an app so you can have windows and Mac apps side by side. This will allow you to use best from both worlds and seamlessly copy and paste between 2 operating systems. It’s easy to install and workflow is quite fluid as long as you have enough RAM to accommodate both operating systems. The downside to this is the price. Parallels license cost $80 which is steep for this type of software and you still have to buy a license for Windows. There is a free alternative to the Parallels app called VirtualBox which is not as smooth as the Parallels app but still more than usable.

Another option is to create a dual boot system with Boot Camp, but this is not nearly as practical. If you use Mac to design and windows to run laser control software you would need to reboot your computer and switch an operating system every time you have to make modifications to your designs. This will get tedious quite quickly. At that point it’s better to go and get cheap used PC, install windows on it and share files over the network.

Top brands in laser manufacturing businesses like Epilog or Trotec offer their laser control software in a form of print drivers and they have Mac version of these drivers. You need to have some vector drawing software (like Adobe Illustrator, Affinity Designer, or Corel for Mac) you will use to create a graphic that you can then “print” on a laser cutter using provided print drivers. But these machines are quite expensive since these are machines from top branded, western manufacturers.

There are some more affordable brands (like GlowForge, Full Spectrum Laser, and Dremel) that have also created software for their laser cutters.

GlowForge has a web-based software for which you gain access when you buy a laser cutter from them and which you use from your web browser. The problem with this is that the app itself is hosted on GlowForge servers so internet access is required for you to be able to use it.

Full Spectrum and Dremel also provide their software (Retina engrave and DigiLab) through a browser but the difference is that the app itself is hosted locally on the machine itself so you can use it even without an internet connection. You only need to have your PC and the machine on the same network.

Since all these apps are browser-based they will all work on every OS including Mac of course, and you will not have to install anything for it to work, just connect your laser with your computer and you are good to go. Another good thing with all of this browser-based software is that they all offer some designing tools so you don’t need to have additional vector drawing software. But this is only true for some basic jobs and for anything more complex you will need to use some dedicated graphic software.

The downside is that these machines only work with provided software (however good or bad you find it to be) and you can’t use anything else because of the integrated controller is made to communicate with that software only.

Chinese K40 lasers are the cheapest CO2 lasers you can find and because of that are quite popular with beginners and hobbyist. They usually come with old M2 nano controllers and Windows-based LaserDRW software + some older (and probably pirated) version of CorelDraw. To make these lasers more user friendly the guy from ScorchWorks created K40Whisperer which is (thankfully) Mac compatible. Installation can be a bit tricky since you’ll need to use the command line but it’s doable and free. It also requires you to have Inkscape installed (you can find a Mac version on the official website inkscape.org).

Inkscape is quite powerful yet free and open-source vector drawing software used by many in the laser cutting community. Great community around this software helped create lots of useful extensions for lasers and there are also lots of tutorials for it including quite a good built-in interactive one.

All in all for those hobbyists who look get into laser cutting and are trying to spend the least amount of money possible on a laser cutting machine and software, you really can’t beat a K40+Whisperer+Inkscape combo since your only cost will be the cost of the K40 machine itself.

Lightburn is a good option for those Mac users who look to spend a bit of money to make their life a lot easier. It supports lots of controllers (RuiDa, Trocen, Smoothieboard, GRBL, Marlin, etc) with more being added all the time and it has a native Mac version. It’s primarily laser control software but it offers lots of vector drawing features so you can design using only Lightburn. Sometimes there is still a need for standalone vector drawing app but we found that we are more frequently using Lightburn to quickly design everything but most complex jobs. This is because with each new version more and more vector drawing features are being added and since Lightburn is made with laser cutting in mind those features are something that you will find yourself using. You can even suggest new features and if it gets enough votes developers will implement it in some of the future updates.

The downside (and that’s the only downside we found so far) is that it costs money. Lightburn license cost $40 for Gcode and $80 for DSP (RuiDa, Trocen…) controllers with another 30$ a year if you want to receive additional updates. If not, you can continue to use Lightburn as is with no additional cost.

This is the cost of a Parallels app license for example but with Parallels you still have to figure out laser control and design software, windows license and you still don’t get the same level of comfort or productivity as with Lightburn.

LaserHint: use Ethernet connection instead of USB to connect your laser to the Mac because there are some well known issues with FTDI drivers on a Mac which is causing problems on laser cutter and other devices that use this way of communicating with Mac. While these issues can be solved, its easier to just use Ethernet connection and skip them entirely.

These are options for Mac users. For those of you who already own a laser cutting machine the brand of the machine and type of the controller will in most cases determine which software you can use, but for others who are looking to get into this world, the choice of software can help steer them in the right direction.

Best design software for laser cutting
(according to the community)